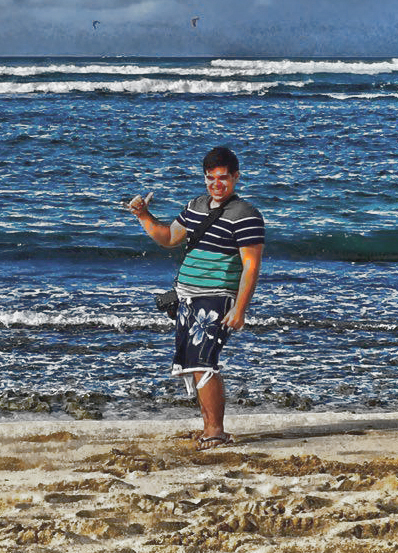 Hello. My full name is Vico (Vick-Oh) Bertogli III. I was born and grew up in Kennett Square Pennsylvania. I lived in the Suburbs and had a lot of fun using my imagination while playing with friends.

Around when I entered middle school my family purchased their first computer, an emachines computer. Almost instantly, even before our dial up was set up, I became fascinated with it. There were so many possibilities. I began using the computer to play video games which further drew my interests in.

By this time, I was using the internet for just about everything. I had moved away from using CD's to play games and began playing them online once our connection became more reliable. It was incredible. I was able to interact with people from anywhere almost instantly. Questions could be answered within a matter of seconds. Items could be bought without leaving your house.

My world was rapidly changing. I was discovering how vast the internet is and the endless possibilities it possessed. This combined with my curiosity to figure things out led me to begin programming. I started with a basic java-esque programming language that could be used with the widely popular IRC program, mIRC. I created a bot that could be invited into channels and had a huge list of commands, games, and inside jokes. I was extremely proud of this bot.

As my programming experience grew, I began to learn HTML in order to create a clan website where the members of the game I was playing at the time could get together and schedule events and interact with one another. HTML was quite a bit different from what I was used to. I enjoyed learning about it but enjoyed programming my bot more.

About the time I entered high school, I began playing my online game less and focusing on myself a bit more. It wasn't until my third year in high school that I began to program again. My school offered programming classes, which I without hesitation signed up for. During these classes I rediscovered my passion, programming. I was able to expand my knowledge of Java while learning more modern web practices and languages.

When I began exploring career paths, I quickly realized that almost anything other than a programming choice would be a mistake. Having had several freelance clients by this time, I was granted a scholarship to the Art Institute of Philadelphia to study Interactive Media & Web Design.

Almost four years later I've finished my journey and I wouldn't be nearly as happy as I am today if I hadn't followed my passion and became a programmer.

I've been working with clients doing freelance work since 2006. In 2014 I graduated college with a BS in Computer Sciences specializing in web development.

I am currently a Web Software Engineer at Managing Editor Inc located in Jenkintown, PA.

Tools of the Trade:

I went searching for something to name my domain back around 2007. I wanted something a bit more abstract. At the time, I was referring to my web services as "Bertogli Webdesign". After trying a few different names out I finally settled on the initials I still use to this day. B (Bertogli) 3 (I'm the third Vico in my family) WD (Web Design). It had a nice ring to it and the URL was short enough to remember.

Even though my focus is heavily on programming and development, I still work within all phases of the website's life cycle.

Be sure to keep an eye out for upcoming projects, tutorials, and information. Stalk me using any method below: